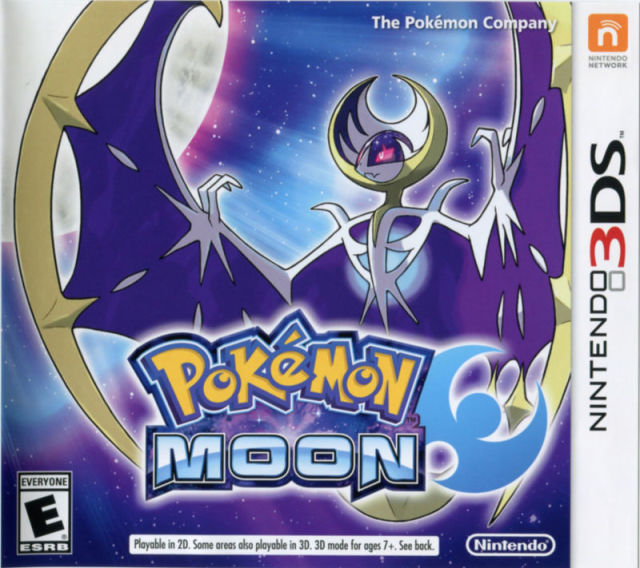 Pokémon Sun (Japanese: ポケットモンスターサン Pocket Monsters Sun) and Pokémon Moon
(Japanese: ポケットモンスタームーン Pocket Monsters Moon) are the primary paired versions of Generation VII and are set in the Alola region. The games will be released on the Nintendo 3DS.
The games were announced worldwide on the 20th Anniversary of the release of Pokémon Red and Green, February 27, 2016, at 12 am JST by Tsunekazu Ishihara through Nintendo Direct. The paired versions will be released worldwide on November 18, 2016, except in Europe where they will be released on November 23, 2016. All copies of the game are playable in nine languages: Japanese, English, German, Spanish, French, Italian, Korean, and Simplified and Traditional Chinese.

Battle Royal
The Battle Royal is a new battle format where four players enter into a free-for-all battle, with any player able to attack (or aid) another. The battle ends when all of one player’s Pokémon faint, with the winner being the player who has the highest combined number of knockouts and number of remaining Pokémon.

Z-Moves
Z-Moves are a new type of move in which the Trainer and Pokémon’s wishes combine to release their full power. Z-Moves are moves of great power, but can only be used once per battle.
In order to use a Z-Move, a Trainer needs two items: a Z-Ring and a Z-Crystal. A Z-Ring is a band worn on a Trainer’s arm. A Z-Crystal must be set into the Z-Ring, and if a Pokémon holds a Z-Crystal of the same type, they will resonate with each other. If the Pokémon then knows a move corresponding to the Z-Crystal’s type, it will be able to use a Z-Move. All Pokémon can use Z-Moves, and there are Z-Moves for each of the 18 types. There are also Z-Moves that can only be used by specific Pokémon.
When used in battle, a Z-Move takes over the entire screen in a short, cinematic display.

Island challenge
The island challenge is a new mechanic introduced in Pokémon Sun and Moon. It is a rite in which players travel through the four islands of Alola with the goal of becoming the strongest Trainer, known as the island challenge champion. In order to complete the island challenge, players must overcome each island’s unique trials which may include, but are not limited to, finding items, completing tests of knowledge, and battling with Pokémon.
At the end of each island’s trial, the player will have to battle a Totem Pokémon. A Totem Pokémon is much larger than its species normally is and has a special aura that appears to aid it in battle, such as by raising its Defense. Totem Pokémon are battled in SOS Battles, where they summon ally Pokémon to participate alongside them.
The final trial on each island is a Pokémon battle with the Island Kahuna known as the grand trial. Successfully clearing the grand trial gives the player the right to move on to the next island in their challenge, conveying official recognition that the player has cleared all of the island’s trials.
Each trial has a Trial Captain who provides guidance to trial-goers. All of the Captains are Trainers who undertook trials in their own island challenge a few years earlier.

Poké Rides
Poké Rides are a new feature whereby players can call on the services of certain Pokémon in order to access areas that they would not have been able to access on their own. These Pokémon are not part of the player’s team, but they may be called on at any time.

Hyper Training
Hyper Training is a new feature that lets the player maximize one or more of a Pokémon’s IVs with the help of a man known as Mr. Hyper in exchange for Bottle Caps. Only a Pokémon that has reached level 100 can undergo Hyper Training.

Festival Plaza
As the player progresses through the game, they will become able to use Festival Plaza. The Festival Plaza allows players to see other people playing near them, or other players that are connected to the internet to battle or trade. By talking to people and listening to their requests in Festival Plaza, players can receive Festival Coins. Festival Coins can be spent on stores in the plaza, and eventually rank up their Plaza.

Poké Pelago
Poké Pelago is a new feature that allows Pokémon that are stored in a PC Box to explore a variety of isles, play on athletic equipment, and enjoy other fun activities. The various islands allow the player’s Pokémon to gather items, discover wild Pokémon, and even raise Pokémon levels and stats.
Compatibility

On January 2017, an update for Pokémon Bank will be released that will allow it to interact with Pokémon Sun and Moon. In addition to regular storage, the update allows Sun and Moon to receive Pokémon from the Generation VI games, as well as the Virtual Console releases of the Generation I games through the Poké Transporter.